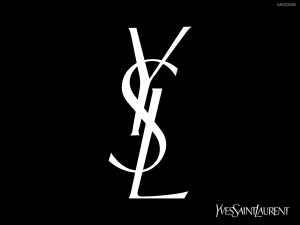 I was introduce to Yves St. Laurent back when I was in high school . No , I was not a rich kid , more like the opposite, i found a job working in a department store, and they assigned me to the Fragrance dept . The funny thing, most of the girls did not want this job – they wanted to work with clothes .. I was OK with smelling like a french whore ( ha ) .. I remember .when I finished my shift and came home – only for my family to demand I take a shower due to the multi layers of perfume made their eyes water .. I was fine .. I never had a problem, with the customers using my arm as a tester .. And lets just say .. during those years .everyone received baskets of perfume samples .. I loved that job.

One scent that was very popular was YSL’ s Opium. I could not stand the scent ! I found it too strong – but the ladies loved it, and the store sold it by the gallons.

I fell in love with the other scent – the opposite side of the scale. RIVE GAUCHE was the scent that I liked to push. I liked it for 3 reasons; it was french – so it had to be good. The scent was very clean smelling, with a very faint scent of floral as a top note, which was perfect for the office . Everyone should smell clean at the office , right ? My favorite part was it was sold in a canister !! What a great idea ! Perfect for the girl on the move! Who wants to travel around with a glass bottle and chance it breaking? I can tell you, my can of RG , had dents in it , and I had no problem with the sprayer or leaks , I loved it

At 18, Yves moved to Paris – where his style caught the eyes of French Vogue Editor – Michel , who knew somebody, who knew somebody .. who introduced young Yves to Doir . This was where he took off – he became the head designer for the House at age 21 !! This is not normal of course, so you can see- this talent was beyond his years. YSL list of hits is long ; ( besides Rive Gauche perfume)

The “trapeze dress”, was one of his designs that saved the House of Dior, and moved him into international fame. Also, the beatnik look;

safari jackets for men and women; tight pants; tall, thigh-high boots;(still hot looking and popular ) and arguably the most famous classic tuxedo suit for women in 1966, 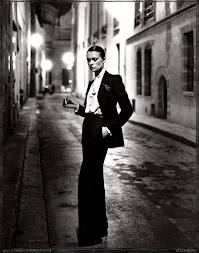 the Le Smoking. He also started mainstreaming the idea of wearing silhouettes from the 1920s, 1930s, and 1940s. YSL was also the first designer to bring prêt-à-porter (ready to wear) fashions to the public. (thank you YSL ).When he opened his boutique on the Left Bank, his first client was Catherine Deneuve !! is that cool ?

As with everything – there is a price. YSL’s drugs & drinking were well known in the business. Its been said, that sometimes the models had to hold him up, for his collection catwalk. In 2002, YSL closed the ” House”, due to his poor health. The name YSL was purchased by Gucci, and Hedi Slimane, is the designer for the YSL ready to wear line. (which made more money than the couture line for years)

So off , I went to view the windows of YSL – only to find disappointment ! There was no smoking jacket update, or a cool dress ! Just a very large pocketbook .. with a lock on it .. really … do you think that little gold lock will stop a thief ?? really ?? I looked into the door, and could only see, jeans and black tops .. nothing much . I dare not go in . the guard was watching me ..he knew I was not there to shop ..maybe he knew ..that little lock would not stop a person like me .. ha

I am attaching the link, for the “spring ” line ..which is black .. i do like black for spring – and its not catching on in Paris either ..

One thought on “YSL”