I am slowly making progress – and now the guest bedroom is finished. This bedroom was the easiest – it had only 20 holes to patch and finish. I did notice that the flooring was cut up . It looks like a blade was used, which I found when I first came inside the house.

There was a tool- that I have never seen before – it looks like a small Captain Hook hand. Wood handle with a stainless steal hook , and the inside of the hook is sharped to a blade. I was told by Jim, this tool is used by drywall contractors, to cut drywall. I now learned there is another use for it- to cut up flooring.

The damage that set me over the edge – was the rewiring of my breaker box. It would never occur to me, as a renter to do such a thing. As long as the light switch worked – why would I care about that metal box ? But this is me – ( thank you Brenda for reminding me ) I do not look for extra work.

Due to this room being cut up – and needed new drywall, and sanded and painted (its becoming my theme song). I thought, to save some off white paint- I try to be cheap and use the closet paint in half of this room; This is where I stored my Christmas items- so I know, its not supposed to be seen – but used. I tried to be classic with the design – and also cheap. 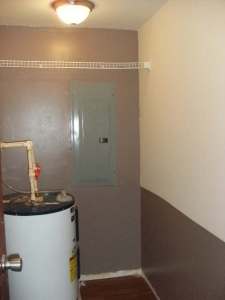 The hallway was just very dirty – yes, she hung more dead plastic art work on the walls too. Now I know, who buys those plastic fish that sing songs ..beyond tacky – but it fits with Piggy. Now we know, who buys that shit – I never thought anyone was that stupid – lucky me , they were my renters.

I have learned a lot from this experience – and now, you should see the police state I am creating for the next renters. My bedroom door will be locked- and if I come back and find it busted – the police will be here to arrest them. If they try not to pay rent – no worries – I will handle the eviction personally. And its not going to be pretty.

If the rent is not paid by the 5th of the month, there will be a late charge. If not paid by the 10th, eviction will start- and I will be flying back. I will walk into my home – because I will have legal rights to my bedroom. Once inside the home – I hope they like Aerosmith & Led Zeppelin, because I will be playing this music starting at 1AM – until 6am, no sleep allowed for the deadbeats. I will make the worst roommate, on the planet – talk loud on the phone, color my hair every week – to smell up the house. Blow dry my hair at midnight, singing Celine Dion songs – off key. It will be a war – that will be face to face. I will drive them out. I will start to show the house – while they are there, and introduce them, as the dead beat renters who are getting evicted.

I hope this will not happen – of course. The listing now requires proof of income- no smokers – only 2 bedrooms for rent. A police background check will also be done. Its amazing still – the crazy replies I have received. One is a single parent, who only wanted to rent one room with her 8 yr old child. I had to tell her – she was a family, not a single person. (maybe, her lack of a wedding band confused her)

Another was a wife, who wanted to rent one bedroom with her husband and promised to find a renter for the second bedroom…was she for real ..? yep she was, she insisted that I listed it, which allowed this – I told her to re read the CL listing. It said 350 per room, per person. Which means – 2 people, does not equal 350. They were living with relatives, and wanted to move out. I understand – its hard to get rid of deadbeats – especially if they are relatives. Not my problem. I wished wife good luck- and took down the CL listing. Now only listing for both rooms for rent ,as a unit.

Another couple responded – they were young – calling from Phoenix, AZ They were very excited to be moving to Charleston, because the city was listed as a great city to live in, per some magazine. ( I really wish the magazines would start to show a full picture of cities – like the high unemployment rates down here) Her boyfriend and herself were eager to move( I heard – lack of commitment of their relationship) They wanted to adopt their first puppy ( I heard- we have no idea how to train an inside dog) They were hard workers, and felt confident they could find jobs once here ( I heard unemployed and hoping for the best). The boyfriend was a smoker, but promised only to smoke outside ( I heard- we are just lying to ourselves and you). I know its hot out there, but did that make them brain dead too?

There are so many other “winners”,that responded – the list is sad and long. I just wanted to share a few – with you. But does this not speak to a real issue – that America is now having a lot of people, falling to a lower level in their financial lives- about 20% do not want a police report, 40% do not have a job to cover their bills,10% do not have money for full security deposit, 20% smoke – and I tell them, it will be grounds for eviction if they lie about smoking, that leaves me with 10% possible qualified renters.

I do see the economic gaps are becoming wider & wider. The middle class is disappearing- along with all the manufacturing and customer service jobs to other countries. How can America government think, the McDonald worker will pay enough taxes to support this fat government ? With the increasing social security payments as the demographics clearly show;-more and more people are retiring. America is getting older, and less jobs are being created in, non- fast food & big box store chains; My old bank- moved the night shift customer service dept to India – because they speak english- they are not helpful- but Wells does not let the details get in the way of a profit.
I will be as careful as possible – as I screen the possible renters – but I am,quickly learning – only 1 in 1O will be a possible – all others are ‘throw backs’ (fishing jaron)

so why am i fighting so hard to keep this home — i walked out of my front door, one evening – and took these pictures ..it speaks for me – bises