As we move to Christine Dior, my first memory is of the perfume called “Poison”. It was a best seller at my store, with the under 30 crowd. The scent was very sweet, like grape juice to me, I disliked it very much…but it was such a hot seller, even the tester bottles were stolen on us all the time. 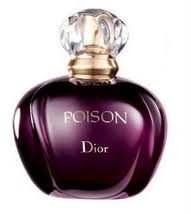 The only thing, I did learn, is the name DIOR, carried a lot of weight with the ‘French fans” crowd. Maybe because, it was one of the few French names, which everyone can say correctly without worrying about mispronunciation, which happens with so many other French designers…
Christine was raised in a wealthy family from Normandy. His father owned a fertilizer company, and there were 5 children in this family… so I guess, that is logical…you know, dealing with fertilizer, you tend to get more quantity
When he decided to leave school, his father financed an art gallery ( must be nice to have such an understanding father) In 1928, the Great Depression hit France, and the father lost the business, and Christine lost his financial backer ( dad) , and he had to close the gallery, and find a job. He worked in the fashion house of Robert Piguet.

From 1940 until 1945, Christine worked for the House of Lucien Lelong as the primary designer. This was a very difficult time for the fashion, because the Nazi’s were the only ones who had the cash to buy couture dresses. So as in every business… you make a deal with the devil – and you have hell to pay… So the few fashion Houses that were in Paris had no choice but to work for the Nazi women and the French Collaborators. (Not a prideful time)

In a interesting side note- Christine‘s sister ,Catherine served as a member of the French Resistance and was captured by the Gestapo, and sent to Ravensbruck concentration camp – later freed by the Allies.

As for Dior’s statement in fashion – a few constant trends seem to be obvious…the very thin waist (pulled in by a statement belt), and lots of fabric…lots of it!

To create the flowing from the hips, curves… but lots of it…keep in mind,during this time in history fabric was a rationed item so to create the puffy hips , it took fabric . It’s sad to see current fashions trying to make women, who have curves, and were encouraged to emphasize these female facts, and now asked to become like a pole- with no curves… 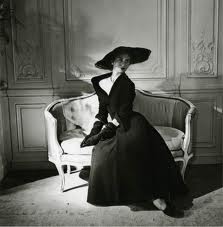 With the likes of Dior and Jean Patou and Jeanne Lavin & Nina Ricci, Paris because the fashion capital with the end of WW2. Dior’s looks are a celebration of the women and their curves. And the hats were big and bold –I like them very much! 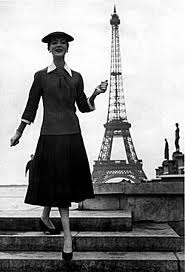 Dior died in Italy in 1957…now the cause is up for debate. Some say it was a fish bone and it caused a heart attack. Some say, he was losing in a card game, and had a heart attack. The there is the other side…saying he had a very active sexual encounter with a younger man…and had a heart attack. (I did not have to tell you he was gay, you already knew right??) Also, he made the cover of Time magazine !! I do not think that is very common …

The store looked very clean from the outside ( I never go inside ..why torture myself ? ) In the windows, the classic female line still continues … 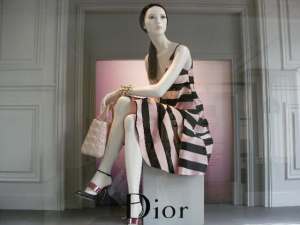 and I can’t forget the shoes ! 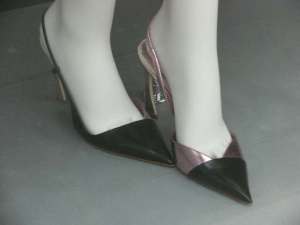 but I also did a Youtube search – and found the new designer for Dior..is trying to save fabric ?? I wonder why ?? does he think another war is coming ??