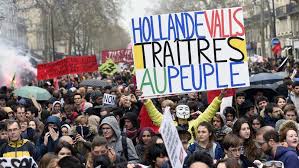 It’s the middle of May, and France is in the midst of a large strike with the trains. The strikers have also stopped gas devilry to the stations, so it will be a matter of time, before people can’t go to work due to an empty gas tanks. It has affected me, making me wait an extra hour, to go home. Once on the train, its horrible- beyond the fire code, everyone is packed in so much, no one can move.

In the short time since I lived here, 4 years, I have seen over 10 strikes- and its beyond my understanding, why the President allows this kind of constant business disruption. When I look into the causes of these strikes – most of time  – its what I call “spoiled child syndrome”.

These strikers have set fires and broken store windows. And NO one is doing anything about it.

This strike is about “future workers contacts”, ie – how many weekends do they have off. If a company hits economic difficulties, they will be allowed to lay off people ( very normal in the USA), without being forced to pay penalties.

For some unknown reason- the French – who pride themselves on demanding “quality”, in all their amenities, have not grasped the concept of “supply & demand”.

To me, these are related practices – you can’t have “quality and meet all demands” – thus why real Channel suits are in the thousands – paying someone in China for 5.00 a day – will not produce “quality units”.

And the French unions are in the practice of misleading the workers. Instead of striking for a possible future worker pink slip,for example, they should worry in stead of where the train parts come from. Where are the iron train tracks coming from? The interior of the train has plastic seats – are they made in France? All stickers are removed,( I looked) for it will confirm my China theory( made in China).

France is now listed as the 3rd highest debtor nation in the EU. It’s very easy to see why. 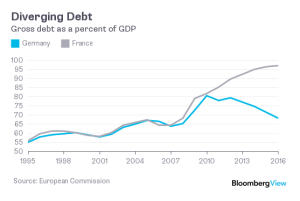 The government has not changed its work and social benefits for over 40 years. Now the current economic problems are forcing France’s passive government to deal with the problems. The fight is about power, the Unions vs. President Holland. I find this struggle amusing, because he identified himself as a socialist .. and now, he is knee deep in Union fights, Merkel’s Migrant Mess, and France’s very high debt.

Now, fast-forward to last week – thousands of graduating students marched in protest-and have started to block access to the oil refineries. 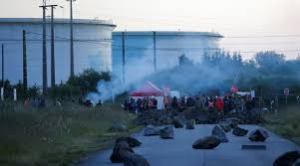 To me, this is now, a National Security issue- but weak Holland will not ‘call out the Guard’ on them, arrest them, put the hose on them etc . Holland is trying to get down the highest unemployment rate of 11%, with is the highest in over 18 years. He lacks the ‘guts’ to make difficult decisions –and these riots are proof of his lack of leadership. 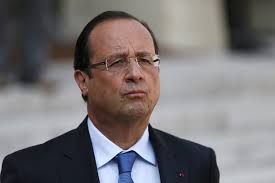 This all goes back to basic business rules – or what I like to call “Kitchen Table Logic», you can’t spend more than what you take in (forever). This is what the French have done, they expected the status quo, to stay constant for the next 50 years. These old laws were written, when manufacturing was still a major employer in this country; like fabric, china dishes, leather goods like shoes and bags and furniture. All of these employers are gone –now young people buy mass produced Vietnam IKEA furniture, fabric is made in India, and daily dishes are made in china.

As time went by – factories left the expensive high wage French worker forever, in search of the 5.00 a day worker, these jobs were never to return- lost forever. The Republic saw this happen, year after year, and they never went back to “edit the laws to fit the current times” they should have slowly- but consistently – removed old laws from the books. Or created some kind of equalizer, – to offset this exodus. 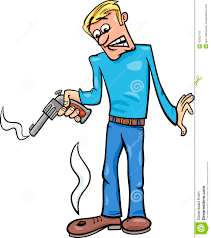 For those of us, who understand logic – the French have shot themselves in the foot ( again). Now thousands pour out of these tax government supported universities – and these young people – have no jobs waiting for them. I tutor one student, who told me- she was going to protest the new laws, because none of her classmates can find jobs. Lucky for her (or unlucky) I explained the factual scenarios – and how it was foretold, and logical that she and her friends will not find the jobs.  I also explained – how, I think, it will become worse and worse. And why her generation must fight to stop migrants from coming into the country – for most of them, will not pay into the tax system, but will only extract from it. As I left, I felt good – teaching my student some basic “American lessons”. She thanked me, but her face showed the shock of these truths- she told me, in all her 12 years of school – no one has ever taught her about “supply and demand”..(she still thinks America is cool).

So where will this end? Another train wreck? The retirement people, will be collecting more & more from the

underfunded system; thanks to living longer, and having unlimited access to doctors and medicine. The current generation is making less and less money. Now add in the Merkel’s Migrant mess- which has exploded up in Calais-and these migrants wanting shelter, food & medical – for FREE!

These young people – will not be able to cover these costs, working at Starbucks, or Café L’Est, and, supporting all the government services- like a free “crèche” – child care for under 5 yrs old. Unemployment checks which can extend into 3 years, at 3,000 euros a month.

All I see, are new generations of “takers”, the givers – are old and dying off – the ones who built these countries – created Western comforts. These comforts & freedoms, have been taken for granted. The Paris café bombing shook that belief, and awoken many liberal sleepers.

To solve this- the French will have to budget their money and benefits better – and edit all non- essential polices – to fit within, the current needs. However, this takes a business and logical mind – and we are talking about the French..yep !.. another Train wreck ..